Deborah in the Bible was a woman of inspiration. She was a daughter of God who not only listened to God but also did what He asked. She was a woman we can all be inspired by and learn from.

Deborah can specifically be seen in the book of Judges chapters four and five.

Contents hide
1 What Was Deborah’s Role in the Bible?
2 Characteristics of Deborah in the Bible
2.1 Deborah’s Role Held Great Importance
2.2 Deborah was A Trustworthy Leader
2.3 Deborah Was Victorious in Battle
3 Bible Verses About Deborah
4 Do Your Own Bible Study of Deborah
5 What Does the Story of Deborah Teach Us?
5.1 Continue in Faith
5.2 Put Your Trust in the Promises of God
5.3 Arise to Your Calling
5.4 Worship and Praise the Lord
5.5 About the Author

What Was Deborah’s Role in the Bible?

Deborah was ultimately a Judge. She was the only female Judge in the Bible.

What she is mostly known for is being a leader. She was asked by God to lead the Israelites back to the Lord. The way in which she led them gives the impression that she was also a warrior.

But this wasn’t all! She was also a prophetess, so when God spoke to her she shared with others and prophesied what God had asked her to share.

Characteristics of Deborah in the Bible

Throughout the book of Judges chapters 4 and 5 we see a range of roles and characteristics of Deborah.

Let’s begin with the meaning of her name. The meaning of Deborah in the Bible is “bee” in Hebrew (4:4 & Deuteronomy 1:44). In Deuteronomy, her army was referred to as a “swarm of bees.”

There are some characteristics of Deborah that we also see in that of bees.

Deborah’s role in history was seen as of great importance. The Israelite people would even go to her to settle their disputes.

“…the Israelites went up to her to have their disputes decided” (Judges 4:5 NASB)

With this also came respect; Barak was keen for Deborah to go with him, even if it meant the honor would be hers and not his (4:8-9).

Deborah was A Trustworthy Leader

She was clearly good with people. Judges 4:10 shows that the Israelites came alongside and followed her and Barak to go to Kedesh, in fact, there were ten thousand men that followed them! Which also demonstrates how she grew her “colony.”

Deborah Was Victorious in Battle

Deborah was led to attack against the Canaanites because the warriors of Israel lacked courage and so Deborah was led by God to battle and the victory went to her.

Here are some more Bible verses that give insight into the characteristics of Deborah in the Bible.

Leadership characteristics (Judges 4:4) Now Deborah, a prophetess, the wife of Lappidoth, was judging Israel at that time.

Trustworthy (Judges 4:5) She used to sit under the palm tree of Deborah between Ramah and Bethel in the hill country of Ephraim; and the sons of Israel went up to her for judgment.

Knowledgeable (Judges 4:9) She said, “I will certainly go with you; however, the fame shall not be yours on the journey that you are about to take, for the Lord will sell Sisera into the hand of a woman.” Then Deborah got up and went with Barak to Kedesh.

Director (Judges 4:14) Then Deborah said to Barak, “Arise! For this is the day on which the Lord has handed Sisera over to you; behold, the Lord has gone out before you.” So Barak went down from Mount Tabor with ten thousand men following him.

Musical & Creative (Judges 5:3) Hear, you kings; listen, you dignitaries! I myself—to the Lord, I myself will sing, I will sing praise to the Lord, the God of Israel!

Strong (Judges 5:21) The torrent of Kishon swept them away, the ancient torrent, the torrent Kishon. My soul, march on with strength!

Prayerful (Judges 5:28) “Out of the window she looked and wailed, the mother of Sisera through the lattice,‘Why does his chariot delay in coming? Why do the hoofbeats of his chariots delay?’

Do Your Own Bible Study of Deborah

What Does the Story of Deborah Teach Us?

Deborah’s characteristics and story are inspirational. We can take these scriptures about Deborah to learn from her and grow in our own faith and spiritual development.

For starters, her faith was solid. There are many ways in which we can achieve the kind of faith that Deborah had.

For instance, building up our relationship with God. We get to know Him by spending time with Him, reading His Word, meditating on scripture, worship, praise, and prayer. Prayer and Bible study are so important. We don’t just talk to Him, we need to stop and take time to listen to what God has to say to us too.

Put Your Trust in the Promises of God

If our God is for us then who can be against us (Romans 8:31)? God is for each and every one of us. If we are for Him then we can only be doing what is right. Therefore we need to put our trust in Him and the promises He has for us. When we read His Word, the Bible, we see all the promises that He has given. It’s up to us to know what these are and trust that He will deliver in these promises. By reading through the scriptures we see many promises, ones that have been made and delivered and also ones that we might be waiting on. It is important to remember the ones that have been delivered as it is these that help us to trust in Him.

“You will keep in perfect peace those whose minds are steadfast, because they trust in you.” Isaiah 23:3 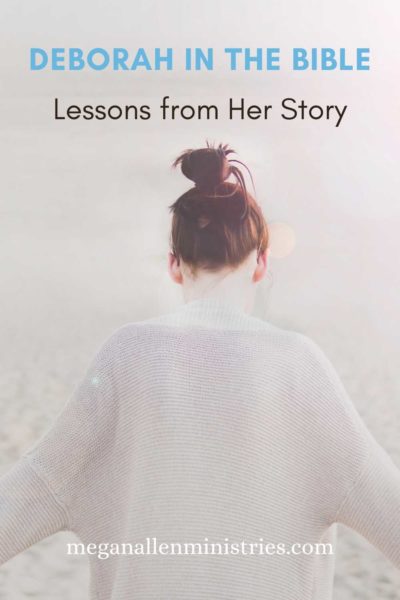 Arise to Your Calling

Deborah heard from God and then she stepped out in faith. She arose to her calling. God asked her and she went.

“Villagers in Israel would not fight; they held back until I, Deborah, arose, until I arose, a mother in Israel” (Judges 5:7).

She was called by God to lead the Israelites out. She heard from God and knew what He was asking of her and then she arose and did it.

Is there something God is asking you to do that you have been putting off? Perhaps you are afraid. Perhaps you are too busy with other things. Or maybe you are simply procrastinating. Maybe you just don’t know how he is calling you.

(If you are needing help in arising and getting started then check out Christian Life Coaching and book in your FREE session.)

Worship and Praise the Lord

By doing the will of God, Deborah was triumphant. There are many things we can also do to fight our battles well. We can listen to or write music, songs, and poems that glorify God. We can recognize what God has done and is doing for us, in the world, and in our lives.

It is seen in Judges 4 and 5 that Deborah was not only a leader but also an encourager. Her faith, trust, and loyalty to God led her to fulfilling God’s plan for her.  Deborah is a great example for all of us as God’s children. We can follow her example to achieve victory with Christ through His will for each of us.

It’s your turn to arise! Are you ready?

Lauren became a born- again Christian in 2004. She is the author of ‘Christian based Cognitive Behavioural therapy,’ a Speaker and a Christian Life Coach. Which is how she helps people to recognise & overcome limiting beliefs & negative mindsets and help them to discover and step into their God given purpose. Find more from her at her blog.