Being called a prostitute would be bad enough if you are one, imagine being referred to like this when it’s not true. Even though Mary Magdalene didn’t know about the reference, it has put a stain upon her name for many years. The story of Mary Magdalene in the Bible does not contain any scripture to refer to her as a prostitute.

Some questions to ask ourselves about the Mary Magdalene Bible study:

What is the story of Mary Magdalene in the Bible?

Mary Magdalene was from the town of Magdala which means “tower” or “castle”. This name helps distinguish her from the other Marys’ of the scripture. Magdala was a thriving town in the days of Jesus and it was thought Mary Magdalene was a woman of means because she was able to help support Jesus and the disciples.

The number “7” was thought to show how severe Mary’s possession was and possibly could have been worse than some of the other women who had spirits exercised. She was one of the few of those who were healed that were named in the Bible.

“After this, Jesus traveled about from one town to another, proclaiming the good news of the kingdom of God. The twelve were with Him, and also some women who had been cured of evil spirits and diseases: Mary (called Magdalene) from whom seven demons had come out; Joanna the wife of Chuza, the manager of Herod’s household; Susanna; and many others. These women were helping to support them out of their own means.” Luke 8:1-3 NIV

Mary became a follow of Jesus and was one of the faithful women who supported Him and the disciples.

Mary Was There at the Foot of the Cross

Mary Magdalene not only help support Jesus financially but was there for Him at His crucifixion. She remained there even though it was dangerous for her and the others to do so.

“Near the cross of Jesus stood His mother, His mother’s sister, Mary the wife of Clopas, and Mary Magdalene.” John 19:25 NIV

After Jesus died, Mary Magdalene followed to see where they were taking Him so she could return to prepare His body.

Mary stood outside the tomb crying because she did not see the body of Jesus and she thought someone had taken it away.

“At this, she turned around and saw Jesus standing there, but she did not realize it was Jesus. He asked her, ’Woman, why are you crying?? Who is it you are looking for?’ Thinking He was the gardener, she said, ‘Sir, if you have carried Him away, tell me where you have put Him and I will get Him.’ Jesus said to her, ‘Mary.’ She turned toward Him and cried out in Aramaic, ‘Rabboni’ (which means ‘Teacher’). – John 20:14

This is a privilege for Mary to see Jesus before anyone else. When He called her by name, she recognized Him immediately. What tremendous joy must have filled her heart. We can have that same joy when we recognize His Words to us. 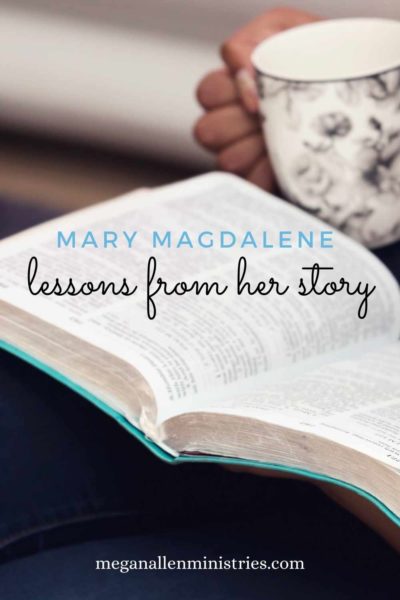 Do Your Own Bible Study of Mary Magdalene

If you would like to do your own in-depth study of Mary Magdalene make sure you grab the Bible study worksheets kits. Use the Chapter Study Kit to do your own study of this woman of faith.

Mary’s life has many lessons that can apply to our lives. Yes, her story begins with a reality of living in mental anguish by possessions of demons that most people cannot relate to. In her conversion to Jesus Christ, we can begin to share with this remarkable woman her commitment to our Lord and Savior Jesus Christ.  She was faithful, grateful, and loving.

Jesus Healed Mary Magdalene and He Can Heal Us Too

When we realize Mary’s condition at the time she met Jesus, we may not think of what she could have looked like, she might have been disheveled, dirty, and wild in behavior. This is a picture of us without Christ and yet as He did Mary, He reaches out to bring us to Him.

“But God demonstrates His own love for us in this: While we were still sinners, Christ died for us.” Romans 5:8 NIV

When Mary was healed, she no longer was the same person and neither are we.

“Therefore, if anyone is in Christ, the new creation has come. The old has gone, the new is here.” 2 Corinthians 5:17 NIV

Mary Had a Grateful Heart for Jesus

“Praise the Lord, my soul, and forget not all His benefits–who forgives all your sins and heals all your diseases, who redeems your life from the pit and crowns you with love and compassion, who satisfies your desires with good things so that your youth is renewed like the eagle’s.” Psalm 103:2-5

It’s not recorded in scripture how Mary united with Jesus and the disciples. All we know is she was healed by Him and began to follow. What we do know are her faithfulness and generosity. As we read before she was one of the women who helped support Jesus. She gave up her way of living for Jesus. She was so grateful for what He had done that she lived for Him. We need to follow in her footsteps.

Mary Followed Jesus to the Cross

In spite of a chance of being arrested, Mary followed Jesus to the cross, stayed until His death and made sure she knew where He was buried. He was the sustainer of her life and she followed Him everywhere.

In Mary we see a valuable lesson of love and obedience. Do we follow Him where ever He leads?

“Then Jesus said to the disciples, ‘whoever wants to be My disciple must deny themselves and take up their cross and follow me.’” Matthew 16:24 NIV

Mary was a true disciple of Jesus.

Mary Magdalene was the First to Deliver the Good News

Mary traveled to the cross in the early morning hours while it was still dark to prepare Jesus’ body for burial. As we know she couldn’t find His body but He revealed Himself to her.

“Jesus said, ‘Do not hold on to Me, for I have not yet ascended to the Father. Go instead to my brothers and tell them, ‘I am ascending to My Father and your Father, to My God and your God.’ Mary Magdalene went to the disciples with the news: ‘I have seen the Lord!’ And she told them that He had said these things to her.” John 20:17-18 NIV

Revealing the good news that Jesus was alive was given to Mary Magdalene.  The Lord rewarded her for her faithfulness to Him and she became the first to give the Gospel.

Mary Magdalene was a Disciple of Jesus Christ

These women who followed and helped Jesus were born again as we are. They had the experience of being with Him before and after His resurrection.

Whenever the women were mentioned in scripture, Mary Magdalene almost always headed up the list with the exception of Jesus’ family. It could be that she was a leader among the women.

We know that she was present with the disciples after the transfiguration of Jesus in the room where they stayed.

“They all joined together constantly in prayer, along with the women and Mary the mother of Jesus, and with His brothers.” Acts 1:14 NIV

Mary was Portrayed in False Light

Mary would be relieved to not have known the stigmas that were assigned to her name. She was a woman who was rescued from a terrible life of darkness by the light of the world.

People who know nothing about the Bible speculate to create drama where there is none. Mary was not a prostitute nor married to Jesus as some have tried to report. She was a wonderful Christian woman who loved the Lord and the disciples and wanted to show her gratitude. She gave all she had to be the person the Lord wanted her to be. We cannot find a better woman to emulate.

Jackie writes at From Loss to Hope by God’s Word, where she seeks to encourage women who are going through tough times to find hope and strength in Jesus.