What does the Bible say about our identity in Christ and why is it so important?

Therefore if anyone is in Christ, this person is a new creation; the old things passed away; behold, new things have come. – 2 Corinthians 5:17 NASB

Once we place faith in Christ we are made new and given a new identity. If we want to walk according to this new character it’s important that we understand it.

These are all very important questions! Keep reading to learn more about what the Bible says about who you are in Christ. Make sure to read to the end and get a free identity in Christ pdf.

What Does Identity in Christ Mean?

Our spiritual identity is who God made us to be in Christ. The Bible says that once we place our faith in Jesus and given the indwelling Holy Spirit that we are also given a new identity.

Therefore we have been buried with Him through baptism into death, so that, just as Christ was raised from the dead through the glory of the Father, so we too may walk in newness of life. – Romans 6:4 NASB

We have been made new! However, while we are on this earth we still have to wrestle with our old nature. This old nature wages war against the new in an attempt to make us forget who we have been transformed into.

For the desire of the flesh is against the Spirit, and the Spirit against the flesh; for these are in opposition to one another, in order to keep you from doing whatever you want. – Galatians 5:17 NASB

This is why we must continue to renew our minds with the truth of God’s Word.

do not be conformed to this world, but be transformed by the renewing of your mind… – Romans 12:2

What the Bible Say About Your Identity in Christ

If you saw the movie Overcomer (I totally recommend it), you may remember when Principle Brooks (Priscilla Shirer) asked Hannah to read Ephesians 1-2 and write down everything these scriptures said she was.

Let’s do something similar. Let’s make our own identity in Christ list based on what we read in Ephesians chapter 1.

What Does Ephesians Say About Our Identity?

just as He chose us in Him before the foundation of the world, that we would be holy and blameless before Him. In love 5 He predestined us to adoption as sons and daughters through Jesus Christ to Himself, according to the good pleasure of His will, 6 to the praise of the glory of His grace, with which He favored us in the Beloved. 7 In Him we have redemption through His blood, the forgiveness of our wrongdoings, according to the riches of His grace… In Him we also have obtained an inheritance, having been predestined according to the purpose of Him who works all things in accordance with the plan of His will – Ephesians 1:4-7, 11 NASB (see context)

More Bible Verses About Our Identity in Christ

There are so many passages of scripture that speak of this new life God has given us. Here are just a few more identity in Christ Bible verses to study.

My challenge to you is to not simply gain theoretical knowledge of the Truth in these verses. Ask the Lord how you need to apply them to your life. Then walk in the revelation He gives you.

You are an ambassador
Therefore, we are ambassadors for Christ, as though God were making an appeal through us; we beg you on behalf of Christ, be reconciled to God. – 2 Corinthians 5:20

You are a friend of Christ
I am the vine, you are the branches; the one who remains in Me, and I in him bears much fruit, for apart from Me you can do nothing. – John 15:5

You are seated with Christ in heavenly places
and raised us up with Him, and seated us with Him in the heavenly places in Christ Jesus – Ephesians 2:6 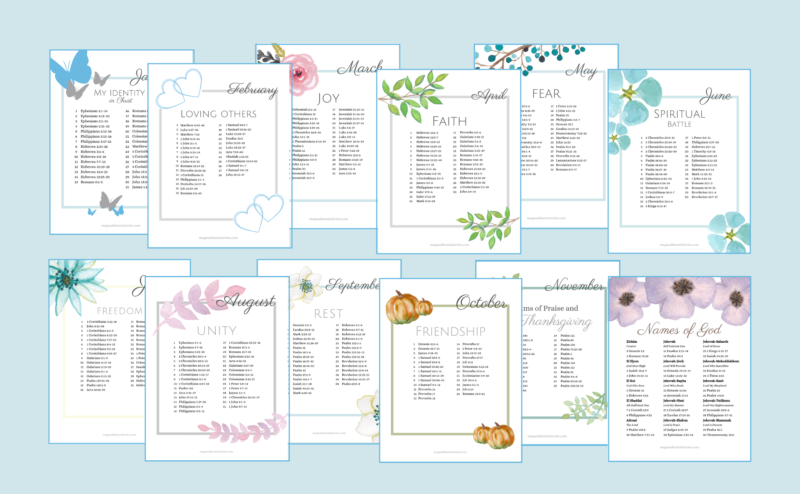 Biblical Characters Who Struggled with Their Identity In Christ

If you struggle to realize and walk in your identity in Christ, don’t be discouraged. You are not alone. Since the garden, God’s people have struggled with identity.

If you think about it, this was part of Eve’s problem. Instead of embracing the identity God placed on her, she instead chose to listen to the lie that said she could become like God.

4 The serpent said to the woman, “You certainly will not die! 5 For God knows that on the day you eat from it your eyes will be opened, and you will become like God, knowing good and evil.” – Genesis 3:4-5 NASB

Judas was one of Jesus’ chosen disciples. He walked with him daily. I think his identity crisis was more in realizing Christ’s identity. He failed to recognize who Jesus was. If he had, I think what we read about him today would be much different.

If you read through 1 and 2 Corinthians you would see that this was a church of believers who struggled to continue in their identity in Christ.

Use this free identity in Christ printable to remind yourself who God says you are. 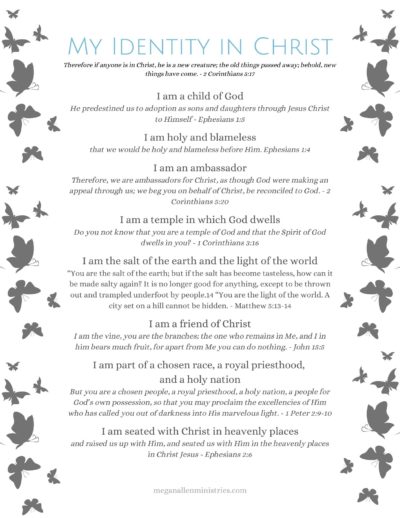 Why It’s Important to Know Your Identity in Christ

Who we believe we are is directly tied to our actions. It’s important for us to remember who we were before Christ and who we have now become because of Christ.

And you were dead in your offenses and sins, 2 in which you previously walked according to the course of this world, according to the prince of the power of the air, of the spirit that is now working in the sons of disobedience…But God, being rich in mercy, because of His great love with which He loved us, 5 even when we were dead in our wrongdoings, made us alive together with Christ… – Ephesians 2:1-2, 4-5

Knowing Our Identity Helps Us Love Others

I love the story of Jesus sharing His last supper with His disciples. I’m always amazed by the example of humility He gave them.

3 Jesus, knowing that the Father had handed all things over to Him, and that He had come forth from God and was going back to God, 4 *got up from supper and *laid His outer garments aside; and He took a towel and tied it around Himself. 5 Then He *poured water into the basin, and began washing the disciples’ feet and wiping them with the towel which He had tied around Himself. – John 13:3-5 NASB

However, other than leaving an example of humility and servanthood for His disciples to follow, do you notice what else motivated this action? We see in verse 3 that He understood and was confident in who He was. He knew that He had access to all the resources of His Father. He knew that He had come forth from God and would be returning to Him.

I believe this confidence gave him the assurance He needed to stoop to this position of humility.

Our confidence in who we are as God’s children give us the ability to love others according to God’s word.

Knowing Our Identity Helps us Persevere Through Trials

even though now for a little while, if necessary, you have been distressed by various trials, 7 so that the proof of your faith, being more precious than gold which perishes though tested by fire, may be found to result in praise, glory, and honor at the revelation of Jesus Christ; 8 and though you have not seen Him, you love Him, and though you do not see Him now, but believe in Him, you greatly rejoice with joy inexpressible and full of glory, 9 obtaining as the outcome of your faith, the salvation of your souls. – 1 Peter 1:6-9 NASB

Understanding who we are as His children helps us persevere through the trials we face in this world. Because we know as His children that this world is temporary. We have a future hope and a future glory to look forward to. This hope strengthens us to keep moving forward in faith.

Knowing Our Identity in Christ Helps us Battle in Prayer 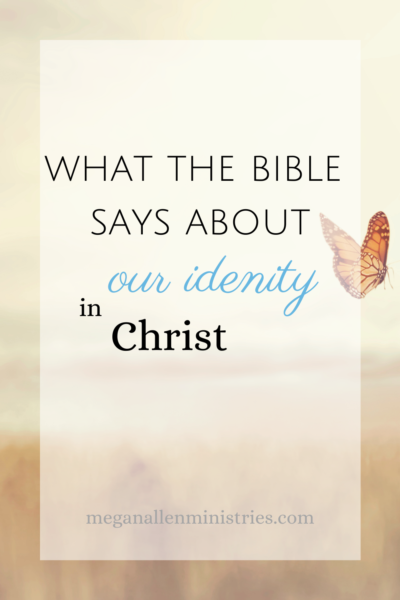 We are in a battle. This battle is spiritual and takes place within the heavenly places.

Prayer is one of the greatest weapons we’ve been giving to battle in this fight.

With every prayer and request, pray at all times in the Spirit. – Ephesians 6:18

As His children, it’s important that we understand who we are and the position we have been given in Christ.

when He raised Him from the dead and seated Him at His right hand in the heavenly places, 21 far above all rule and authority and power and dominion, and every name that is named, not only in this age but also in the one to come. – Ephesians 1:20-21

Christ is seated in the heavenly places above all other rulers, authority, and powers. According to Ephesians 6:12, where are we seated?

and raised us up with Him, and seated us with Him in the heavenly places in Christ Jesus – Ephesians 2:6

That’s right my friend. You have been seated in a position of authority, in Christ, above all your spiritual enemies. When we engage in this battle we fight from a place of victory – because of who we are in Him!

Check out these related posts: