Rebekah in the Bible: Lessons We Learn From Her Story

Have you ever made a decision that you later regretted? I sure have. Rebekah in the Bible did too. I love the story of Rebekah because it’s a great reminder of how God can use our mistakes for His purposes and glory.

When we think about the life of Rebekah, there are some other questions we need to consider.

Who Was Rebekah in the Bible?

Rebekah played an important role as the wife of one of the patriarchs who received the covenant promises of God. She was the niece of Abraham, the daughter of his brother, Nahor. She also married Abraham’s son, Isaac. While her story gets off to a great start, we see later on that she makes a huge mistake. One that betrayed her husband and resulted in a great family feud.

Meaning of Rebekah in the Bible

The name Rebecca in Hebrew means “to tie, bind”.  It comes from the Hebrew name Rivkah, meaning “noose.” Rebekah was a common spelling of the name in the Bible.

Watch the Bible Study Video of Rebekah in the Bible 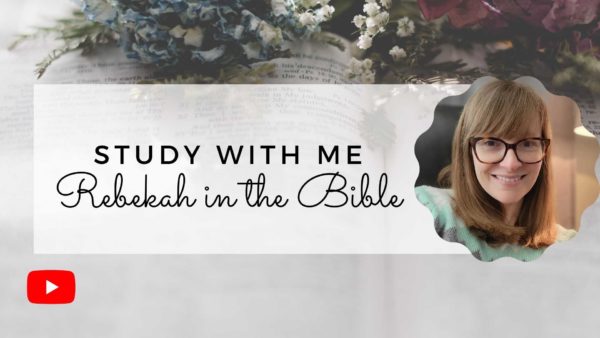 What Did Rebekah Do in the Bible?

The Bible actually has a lot to say about the life of this woman. Like so many other Biblical characters, she had her moments of strength and weakness.

Here is a quick summary of the story of Rebekah in the Bible.

After Sarah, Abraham’s wife had died, Abraham wanted to find a wife for his son, Isaac. He told one of his servants, Eliezer, to go back to the land of his family and find a wife for Isaac among the women in that region. He didn’t want Isaac to marry one of the Canaanite women.

Now Abraham was old, advanced in age; and the Lord had blessed Abraham in every way. 2 Abraham said to his servant, the oldest of his household who was in charge of all that he owned, “Please place your hand under my thigh, 3 and I will make you swear by the Lord, the God of heaven and the God of earth, that you shall not take a wife for my son from the daughters of the Canaanites, among whom I live; 4 but you will go to my country and to my relatives, and take a wife for my son Isaac.” – Genesis 24:1-4 NASB

So, his servant set off to find a wife for Isaac.

It was on this journey that Abraham’s servant found Rebekah. Let’s take a look at some other verses that tell us about Rebekah’s early days.

And it came about before he had finished speaking, that behold, Rebekah, who was born to Bethuel the son of Milcah, the wife of Abraham’s brother Nahor, came out with her jar on her shoulder. 16 The young woman was very beautiful, a virgin; no man had had relations with her. She went down to the spring, filled her jar, and came up. – Genesis 24:15-16 NASB

After a discussion with Abraham’s servant and her family, Rebekah agreed to go back and marry Isaac.

And they said, “We will call the young woman and ask her.” 58 Then they called Rebekah and said to her, “Will you go with this man?” And she said, “I will go.” 59 So they sent away their sister Rebekah and her nurse with Abraham’s servant and his men. – Genesis 24:57 NASB

When we first read about the story of Isaac and Rebekah, we see a woman who conveys faith in God and loyalty to her family. However, later in life, she makes a big mistake.

Let’s take a look at some more Bible verses about how Rebekah showed favoritism to one of her children while also betraying her husband.

Isaac, who was now old and nearly blind, asked his eldest son, Esau, to hunt and prepare the game for his favorite stew. After the meal was prepared, Isaac told his son that he would give him his blessing.

Here is what Rebekah did…

Now Rebekah was listening while Isaac spoke to his son Esau. So when Esau went to the field to hunt for game to bring home, 6 Rebekah said to her son Jacob, “Behold, I heard your father speak to your brother Esau, saying, 7 ‘Bring me some game and prepare a delicious meal for me, so that I may eat, and bless you in the presence of the Lord before my death.’ 8 So now, my son, listen to me as I command you. 9 Go now to the flock and bring me two choice young goats from there, so that I may prepare them as a delicious meal for your father, such as he loves. 10 Then you shall bring it to your father, that he may eat, so that he may bless you before his death.” – Genesis 27:5-10 NASB

Do Your Own Rebekah Bible Study

The verses covered above are not an exhaustive study of the life and story of Rebekah. If you would like to do your own Bible study of Rebekah, make sure to grab the Character Bible Study Worksheets.

Characteristics of Rebekah in the Bible

Based on what we have seen, there are a few characteristics of Rebekah that the text reveals.

Rebekah Showed Loyalty to Her Family

We see in the scriptures some evidence that Rebekah was loyal to her household. Not only was she found with a jar on her shoulder to fetch water for her and her family, but we also see that her first response to Eliezer’s report was to run and tell her family members.

Then the young woman ran and told her mother’s household about these things. – Genesis 24:28

Rebekah also proved to be kind when she offered water to the servant and his camels.

And she said, “Drink, my lord”; then she quickly lowered her jar to her hand, and gave him a drink. Now when she had finished giving him a drink, she said, “I will also draw water for your camels until they have finished drinking.” – Genesis 24:18-19 NASB

Rebekah Was A Woman of Faith

It took great courage and faith in God for Rebekah to agree to go with this man, whom she had never met, based only on the report he gave her.

Even though Rebekah was a great woman of kindness, loyalty, faith, and courage, it’s also recorded that she was a woman who made great mistakes.

She had plotted against her husband with the intention of stealing his blessing meant for their oldest son, Esau and giving it to their youngest, and her favorite, Jacob.

Rebekah’s deception and favoritism among those within her own household ultimately led to division, contempt, and held grudges.

So Esau held a grudge against Jacob because of the blessing with which his father had blessed him; and Esau said to himself, “The days of mourning for my father are near; then I will kill my brother Jacob.” – Genesis 27:41 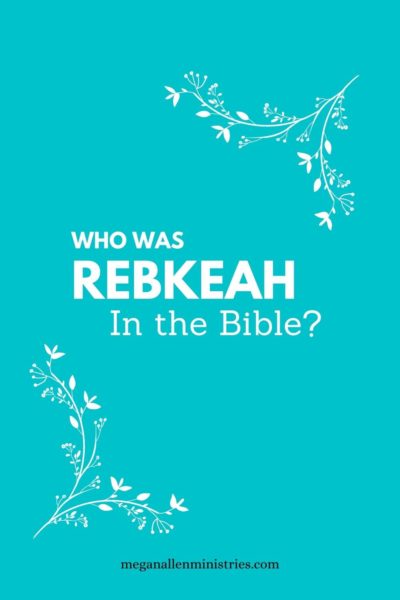 Lessons From Rebekah in the Bible

Based on what we have learned about Rebekah, there are some important lessons we can learn and apply to our own lives.

Let God Carry Out His Plan

Rebekah tried to take God’s plan into her own hands. As we know from Sarah, this never works out in the way we had hoped.

It’s easy to grow impatient or anxious when God doesn’t move within the timeframe we want or expect. Waiting on God is difficult – but there are blessings in waiting.

Yet those who wait for the Lord will gain new strength; they will mount up with wings like eagles, they will run and not get tired, they will walk and not become weary. Isaiah 40:31

Instead of trying to hurry God’s plan or take matters into our own hands, the better option is always to wait on Him to carry it out.

Another great lesson we learn from Rebekah is the danger of showing favoritism. Favoritism hurts families. Not only that, but we see in the book of James that favoritism is a sin.

My brothers and sisters, do not hold your faith in our glorious Lord Jesus Christ with an attitude of personal favoritism… If, however, you are fulfilling the royal law according to the Scripture, “You shall love your neighbor as yourself,” you are doing well. But if you show partiality, you are committing sin and are convicted by the Law as violators. – James 2:1, 8-9 NASB

I find it comforting to know that, despite her failings, God still used Rebekah. God’s plan was not prevented because of her actions. In fact, God used it to orchestrate the fulfillment of His purpose.

God is all-powerful and all-knowing. Our sin and shortcomings can not thwart His plan.

This post may contain affiliate links. See my disclosure for more details.