Tabitha in the Bible: Lesson from Her Life

There is a woman at my church who reminds me a lot of Tabitha in the Bible. I’ve grown to admire her greatly. When I first met her I thought she was quiet and maybe a little introverted.

I’ve come to realize that her quietness is actually confidence.

She simply and faithfully serves others in ways that don’t cause her to stand out or to be seen by others. She doesn’t need to be noticed or complimented on her talents, or for how she serves the body. She is confident in her identity in Christ and in the ways she uniquely, quietly,  and faithfully serves God by serving the body of believers.

As we consider the life of Tabitha, you may have some other questions about this godly woman who defeated death.

Who Was Tabitha in the Bible?

Dorcas, or Tabitha, in the Bible lived in the town of Joppa. Joppa was a city on the coast of the Mediterranean Sea. Dorcas is a Greek name meaning “gazelle,” and Tabitha is the Aramaic meaning of the same name. We find Dorcas’ Bible story in Acts chapter 9.

Now in Joppa there was a disciple named Tabitha (which when translated means Dorcas); this woman was excelling in acts of kindness and charity which she did habitually. 37 But it happened at that time that she became sick and died; and when they had washed her body, they laid it in an upstairs room. 38 Since Lydda was near Joppa, the disciples, having heard that Peter was there, sent two men to him, urging him, “Do not delay in coming to us.” 39 So Peter got ready and went with them. When he arrived, they brought him into the room upstairs; and all the widows stood beside him, weeping and showing all the tunics and garments that Dorcas used to make while she was with them. 40 But Peter sent them all out and knelt down and prayed, and turning to the body, he said, “Tabitha, arise.” And she opened her eyes, and when she saw Peter, she sat up. – Acts 9:36-40 NASB

Tabitha was A Disciple of Jesus

Now in Joppa there was a disciple named Tabitha (which when translated means Dorcas) – Acts 9:36

Tabitha was a follower of Christ. It’s safe to say that her acts of kindness were compelled by her devotion to Christ. She understood that we love and serve God by serving and loving others.

Tabitha Served and Loved Others

this woman was excelling in acts of kindness and charity which she did habitually… and all the widows stood beside him, weeping and showing all the tunics and garments that Dorcas used to make while she was with them. – Acts 9:36, 39

When Peter arrived at Tabitha’s house, he was greeted by the many women that Tabitha served. She had a heart for widows. Possibly because she was a widow herself. Her acts of charity were a way to show others the kindness that she has been shown by Christ. She understood the pain these women were going through and wanted to share the hope and joy she had received.

Related: Bible Verses About Serving Others

Tabitha Was Raised From the Dead

But Peter sent them all out and knelt down and prayed, and turning to the body, he said, “Tabitha, arise.” And she opened her eyes, and when she saw Peter, she sat up. – Acts 9:40

Bringing Tabitha back to life was probably not for her own sake. As believers, it is better for us to be at home with the Lord. Take a look at what Paul said in the book of Philippians.

having the desire to depart and be with Christ, for that is very much better – Philippians 1:23

Peter raised Tabitha from the dead for the sake of the widows and for the faith of others living in that area.

And he gave her his hand and raised her up; and calling the saints and widows, he presented her alive. It became known all over Joppa, and many believed in the Lord. – Acts 9:41-42

Do Your Own Bible Study of Tabitha

Do your own in-depth Bible study lesson of Tabitha by downloading the Character Study Kit. Get all of these Bible study worksheets delivered to your inbox.

Lessons We Learn From Dorcas (or Tabitha) in the Bible

There are many lessons that we can learn from the story of this woman. Here are just a few of them.

We Serve God by Serving Others

As Jesus sat in the upper room with His disciples sharing their last supper together, Jesus suddenly gets up, wraps a towel around His waist and leans down…

Then He poured water into the basin, and began washing the disciples’ feet and wiping them with the towel which He had tied around Himself. – John 13:5 NASB

This was an act of humility. Usually, the servants were the ones who would wash their master’s feet. Jesus was giving His disciples an example to follow and Tabitha was faithfully following in her Lord’s footsteps.

Not only were the tunics a blessing to the widows who received them, but it also showed them that they were cared for. Tabitha’s good works gave evidence of the compassion and care that she felt for these women. Likewise, our good works are the outward expression of our inward love and care for the people in our lives.

Everyone Has A Part to Play

God had given Tabitha a talent for sewing. She faithfully and obediently used what God had given her to serve and build up others.

God has given every believer spiritual gifts and talents to be used in building up the body of Christ.

Faithfulness is Better Than Greatness

I love this story of Tabitha because it shows us how God can use anything, big or small, for His glory.

Tabitha wasn’t out preaching to thousands of people. She wasn’t in a position of power or prestige. Yet, God used her in great ways.

She faithfully and obediently used her talents to love on individual people. It’s easy for us to believe that in order for us to do great things for God’s Kingdom we have to have a place of authority or influence. Tabitha shows us that if we are faithful to use what God has given us in the places He puts us we can make a significant impact on His kingdom. 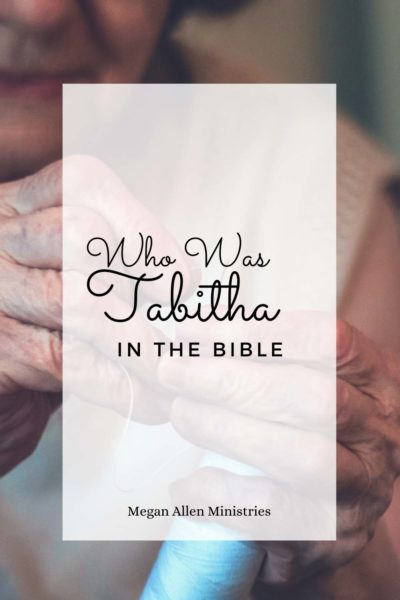 Here are some other lessons and resources you can check out about the life and story of Tabitha in the Bible.