Who Was Rahab in the Bible?

The Israelites were encamped on the opposite side of the Jordan River. Across the other side was the land that God had promised to give them. Joshua sent two spies over into the land to scope out the city of Jericho. Once they arrived in the city, they met a woman who would be known throughout future generations. Who was Rahab in the Bible?

As we consider the life of Rahab, some other thoughts may arise in our minds.

Let’s explore these questions and more as we take a look at what the Bible says about Rahab.

Contents hide
1 Who Was Rahab in the Bible?
1.1 Rahab Lived In Jericho
1.2 Rahab Was A Harlot
1.3 Rahab Was A Woman of Faith
1.4 Rahab Did Not Fear the King of Jericho
1.5 Rahab Feared the Lord
1.6 Rahab Trusted God for Salvation
1.7 Rahab Was An Ancestor to Jesus
2 Do Your Own Bible Study of Rahab
3 Lessons We Learn From the Story of Rahab
3.1 The Fear of the Lord is the Beginning of Wisdom
3.2 God Honors Faith
3.3 God Can Redeem Our Past
3.4 God Uses Our Brokenness

Who Was Rahab in the Bible?

As we read through Rahab’s story we discover some of what Rahab was known for. Let’s take a look at the different passages of scripture about Rahab and discuss just a few of the things we learn about her life.

We learn in Joshua 2 that Rahab lived in the city of Jericho. Jericho was a mighty, fortified city in the land of Canaan.

The inhabitants of Jericho were adversaries of the Israelites. Therefore, at first glance, Rahab seemed to be Israel’s enemy. However, if we continue reading her story in Joshua 2 we find that Rahab was a friend, not a foe, of Israel.

Rahab Was A Harlot

Prostitution was a common practice in this city. Up to the time of Joshua 2, Rahab had participated in harlotry.

Although Rahab has become known in God’s Word as being a resident of Jericho, and for her entanglement in harlotry, she is most commonly known for her faith!

Rahab Was A Woman of Faith

Rahab is one of two women recorded in Hebrews 11 (aka – The Hall of Faith). How did she become known in this way? Let’s take a look at the story of Rahab and the spies.

Rahab Did Not Fear the King of Jericho

Then Joshua the son of Nun sent two men as spies secretly from Shittim, saying, “Go, view the land, especially Jericho.” So they went and entered the house of a prostitute whose name was Rahab, and rested there. 2 But it was told to the king of Jericho, saying, “Behold, men from the sons of Israel have come here tonight to spy out the land.” 3 And the king of Jericho sent word to Rahab, saying, “Bring out the men who have come to you, who have entered your house, for they have come to spy out all the land.” 4 But the woman had taken the two men and hidden them, and she said, “Yes, the men came to me, but I did not know where they were from. 5 It came about, when it was time to shut the gate at dark, that the men went out; I do not know where the men went. Pursue them quickly, for you will overtake them.” 6 But she had brought them up to the roof and hidden them in the stalks of flax which she had laid in order on the roof. – Joshua 2:1-6

From these verses, we see that Rahab had taken the spies and hidden them from the king’s soldiers.

Why would she do that? Let’s keep reading!

Now before the spies lay down, she came up to them on the roof, 9 and said to the men, “I know that the Lord has given you the land, and that the terror of you has fallen on us, and that all the inhabitants of the land have despaired because of you. 10 For we have heard how the Lord dried up the water of the Red Sea before you when you came out of Egypt, and what you did to the two kings of the Amorites who were beyond the Jordan, to Sihon and Og, whom you utterly destroyed. 11 When we heard these reports, our hearts melted and no courage remained in anyone any longer because of you; for the Lord your God, He is God in heaven above and on earth below. – Joshua 2:8-11 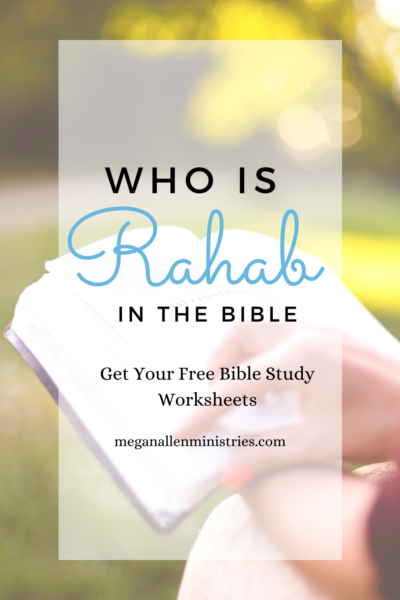 The people of Jericho had heard what the Lord had done for His people – and they were terrified. While the vast majority of the inhabitants of Jericho feared their own destruction, Rahab was beginning to understand the fear of the Lord.

This fear led to confess that the God of Israel is the God of heaven and earth (look again at Joshua 2:11).

Then we see that Rahab made a request of the spies:

“Now then, please swear to me by the Lord, since I have dealt kindly with you, that you also will deal kindly with my father’s household, and give me a pledge of truth, 13 and spare my father and my mother, and my brothers and my sisters, and all who belong to them, and save our lives from death.” – Joshua 2:12-13

If we continue reading in this chapter, we see that this request was granted. Rahab’s faith in the Lord ultimately led to the salvation of her entire household. We read later in Joshua 6 that Rahab and all her family in her house were spared when the Israelites attacked Jericho.

Rahab Was An Ancestor to Jesus

Matthew chapter 1 also reveals Rahab’s son in the Bible. After marrying Salmon, we see that Rahab bore him a son, Boaz. Salmon and Boaz are within the lineage of Christ.

Do Your Own Bible Study of Rahab

Lessons We Learn From the Story of Rahab

So now that we understand a bit more about the life of Rahab, we are better equipped to apply her experiences to our own walk with the Lord.

Here are just a few principles we learn from the life of this woman.

The Fear of the Lord is the Beginning of Wisdom

Proverbs 9:10 says that “the fear of the Lord is the beginning of wisdom”. We can definitely see this principle played out in the life of Rahab.

Her healthy fear of the Lord granted her the wisdom she needed to prepare for the preservation of herself and her family.

Hebrews 11:6 says that “without faith it is impossible to please Him…”. God honored Rahab’s faith by not only sparing her life, but also giving her a place among his people.

Also, the book of James tells us that she was considered to be righteous because of her faith.

In the same way, was not even Rahab the prostitute considered righteous for what she did when she gave lodging to the spies and sent them off in a different direction? As the body without the spirit is dead, so faith without deeds is dead. – James 2:21-26

God Can Redeem Our Past

We discover later that Rahab integrated among the Israelites. I wonder how she felt as she walked into the Isrealite camp?

Will they accept me? A woman with a past like mine? Will I always be defined according to the woman I used to be? A harlot?

We read in Matthew chapter 1 that Rahab married Salmon. God not only welcomed her as one of his people, He also redefined her past.

God is in the business of transformation!

Therefore, if anyone is in Christ, he is a new creation. The old has passed away; behold, the new has come. – 2 Corinthains 5:17

Rahab is counted among those within the genealogy of Jesus!

Not only can God redeem our past, but he can also use it! He can take all our past hurts, regrets, and mistakes and redeem them for His good and His plan.

So, who was Rahab in the Bible?

A woman with a past. A harlot. A woman whom God chose to be counted among the people who would bring forth His promise – Jesus, our Savior.

Make Sure to Check Out These Other Posts: