Who Was the Woman at the Well?

Who was the woman at the well? Broken. Ashamed. Cast out. Stuck in sin.

Do you know anyone who bears these titles? Or, perhaps, these words press on an area in your own heart.

I’m so thankful for all the stories of the Biblical characters who were flawed and rough around the edges. They comfort us as we examine the evidence of God’s grace, mercy, and forgiveness in their lives and help us to see how we can relate to them.

As we consider the woman at the well, there may be some other questions that come to mind.

Who was the Woman at the Well?

Here are a few of the characteristics of the Samaritan woman that stand out.

She Was a Samaritan Woman

Samaritans were a group of people who were part Jew and part Gentile. The Samaritans began taking possession of the land of Israel after Israel was taken captive by the Assyrians. Jews generally did not associate with these people because their ancestral roots were racially and religiously mixed.

The Woman a the Well Was Living in Adultery

Not only was she living in adultery, she also had a shameful past. We see in John 4:6 that she had come to the well at the sixth hour. This was around noon-time during the heat of the day. Not only that, but she also came alone.

“This woman came for water at an unusual hour and she came alone. Typically, women came for water earlier in the day and they came in groups. Perhaps there was a sudden need, or perhaps she was a social outcast, shunned by other women in the community.” –  David Guzik

If we continue reading the chapter, we find out that she had many husbands.

It could have been that she wanted to come to the well to draw water when she knew she could do it alone. She wanted to avoid the awkward stares and murmurs that she was sure to encounter if she came with the other women.

Jesus Talked to Her

Despite the enmity between the Jews and Samaritans, Jesus chose to associate with her. Jesus was of Jewish descent, from the lineage of King David.

“The strict Rabbis forbade a Rabbi to greet a woman in public. A Rabbi might not even speak to his own wife or daughter or sister in public. There were even Pharisees who were called ‘the bruised and bleeding Pharisees’ because they shut their eyes when they saw a woman on the street and so walked into walls and houses!” (Barclay)

Initiating a conversation with the woman shows that Jesus wasn’t concerned about political correctness. He broke through the cultural barriers in order to love others. 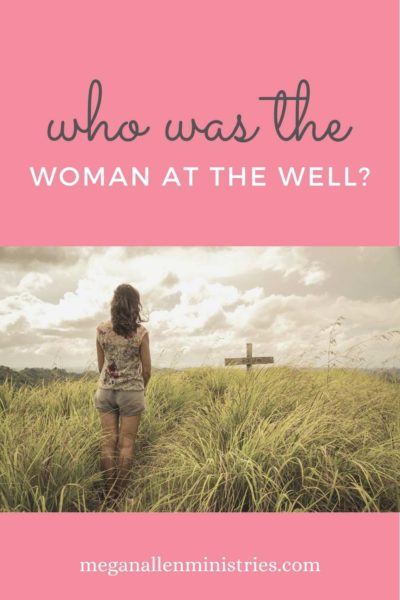 Jesus’ Conversation with the Woman at the Well

There is a lot that we could dig into within this discourse between Jesus and the woman at the well. I want to just focus on four main topics that Jesus discussed with her.

Jesus Told Her About Living Water

Jesus replied to her, “If you knew the gift of God, and who it is who is saying to you, ‘Give Me a drink,’ you would have asked Him, and He would have given you living water… Jesus answered and said to her, “Everyone who drinks of this water will be thirsty again; 14 but whoever drinks of the water that I will give him shall never be thirsty; but the water that I will give him will become in him a fountain of water springing up to eternal life.” 15 The woman *said to Him, “Sir, give me this water so that I will not be thirsty, nor come all the way here to draw water.” – John 4:10; 13-15

What Jesus had spoken of figuratively, she took literally.

Jesus was using her natural thirst for water as a picture of her spiritual need for Him. The living water that Jesus was offering her would satisfy her soul’s desires in a way that she had not yet experienced.

Up to this point, she was searching for fulfillment in things that only left her wanting more.

Jesus Told Her About Her Husbands

The woman at the well had been searching for fulfillment from people. Specifically, her husbands.

By making this request, Jesus was accomplishing a few different things:

Jesus was helping her to understand her need for the living water that He was offering her.

Jesus Told Her About Proper Worship

The woman *said to Him, “Sir, I perceive that You are a prophet. Our fathers worshiped on this mountain, and yet you Jews say that in Jerusalem is the place where one must worship.” – John 4:19-20 NASB

It’s possible that this was a genuine question, but it’s more likely that she was just trying to avoid the current topic of conversation.

You Samaritans worship what you do not know; we worship what we do know, because salvation is from the Jews. But a time is coming, and even now has arrived, when the true worshipers will worship the Father in spirit and truth; for such people the Father seeks to be His worshipers.  God is spirit, and those who worship Him must worship in spirit and truth.” – John 4:22-24 NASB

Jesus was telling her that a time was coming when worship would no longer be focused in a  specific place, temple, or mountain. True worship will be done in spirit and in truth.

Jesus Told Her About Himself

Here we see Jesus reveal Himself as the Messiah to a woman that, from the culture’s standpoint, he shouldn’t have even been talking to.

Do Your Own Bible Study of the Woman at the Well

If you would like to do your own in-depth study of the Samaritan woman at the well, make sure to get the Bible Study Worksheets Kits. The Character Study Kit is designed to help you do your own study of any Biblical character.

Lessons Learned from the Woman at the Well

As we reflect on the woman at the well and what we have observed in her story, there are a few lessons that can be applied.

True Satisfaction Is Found In Jesus

Jesus wants to satisfy the deepest longings of our soul through a loving relationship with Himself. It’s only through the waters of His Spirit abiding in us that we are able to live, worship, and commune with Him.

I love this quote from Matthew Henry:

He shall never thirst – he shall never want that which will abundantly satisfy his soul’s desires; they are longing, not languishing. A longing for more and more of God, but not despairing thirst.”

People Need to Know About Jesus

The one thing that keeps us from this loving relationship with the Lord is sin. People in the world, like the Samaritan woman at the well, need to know the consequences of their sin. Sin will never satisfy their deepest desires here on earth. They need to know that the price of their sin has been paid and that they too can drink from the waters of salvation.

We have been given a command and commission from Jesus Himself to go and tell the world what He has done for them.

And Jesus came up and spoke to them, saying, “All authority in heaven and on earth has been given to Me. 19 Go, therefore, and make disciples of all the nations, baptizing them in the name of the Father and the Son and the Holy Spirit. – Matthew 28:18-19 NASB

Jesus Loved the Outcast, So Should We

Who is a woman you know who may be bearing the weight of sin, guilt, and shame? Maybe it’s a woman who you and others avoid because associating with her may switch on the rumor mill.

This is the type of woman the Samaritan was. Jesus loved her.

Who is a lost woman in your life who needs to know Jesus? How can you love her? How can you offer her living water?

We Must Worship In Spirit and Truth

What does it mean to worship in Spirit and Truth?

Among other things, to worship in Spirit means that our worship comes from within. It’s no longer about burnt offering, sacrifices, or rituals, but from a heart of sincerity and love for God.

There are some scholars who believe that to worship in Spirit means within the Holy Spirit.

To worship in truth means that we worship in accordance with what has been revealed in God’s word.

The Woman at the Well Commentaries

If you would like to learn more about this Biblical character I encourage you to, first, do your own study of the scriptures, then consult a trusted commentary. Here are a couple I recommend:

Check Out These Other Posts: